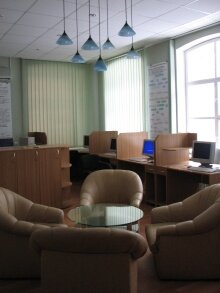 In 2001 the Center of modern information technologies (IT-center) was established on the base of Computer-Aided Management Systems department due to support of our university administration and engaging of sponsor’s funds. This event coincided with opening of the ISTA’2001 conference. Today the IT-center is equipped with modern computer facilities including a local computer network, which is based on the Pentium IV personal computers with access to the Internet. The basic purpose of the IT-center work is to create favorable conditions for pilot projects realization in the area of modern information technologies, first of all in cooperation with Ukrainian and foreign scientific and technical partners among which are University of Klagenfurt, Technical Institute of Villach (Austria), and the Scientific and Innovational Center at the University of Magdebourg. For a rather short period of time of the IT-center existence we have already managed to get some positive outcomes: for example, several contracts on development and implementation of an Internet-based information and management process control system on gas production objects in Kharkov region were successfully observed, and also a project was completed, which concerned the software creation by a group of teachers and students of the CAMS department according to the contract with the firm UNiQUARE (Austria), a business-partner of the University of Klagenfurt. In 2002-2003 scientific and technical seminars and project presentations of the best students and post-graduates of Computer-Aided Management Systems and System Analysis and Management departments were organized in the IT-center. The following foreign partners took part in those presentations: head of the Institute of Applied Information Systems of University of Klagenfurt, honorary doctor of our university professor Dr. H.C.Mayr, professor of University of Salt-Lake city S.Liddle, head of the firm UNiQUARE Mr. D.Schwarzenbacher, head of the electronics department of Technical Institute Villach professor A.Pester. On the basis of these mutually advantageous and interesting scientific contacts we have started working at preparation of documents, which are necessary for deriving several grants of EU under programs TEMPUS/TACIS in 2004-2005. According to the contract made in October, 2003 between NTU ‘KhPI’ and German Informatics Society (Gesellschaft fuer Informatik e. V. – GI) and signed accordingly by our rector, professor L.L.Tovazhnjansky and President GI, professor Dr. H.C.Mayr one of the most responsible duties for the IT-center will be realization of a several activities of the ECDL (European Computer Driving Licence) Program Coordination Center in Ukraine as well. According to this agreement, our university becomes the center of organizational and methodical work of Program ECDL in Ukraine which is intended to improve a level of computer literacy related to the unified standards operating now in the countries of EU.